I've written before on the absurdity of Breed Specific Legislation (BSL) and why BSL is BS. It hit home for us last year when we had Cinderella, a 65 pound "pit bull" for 48 hours before our landlords decided we couldn't have a pit bull type dog on the premises. 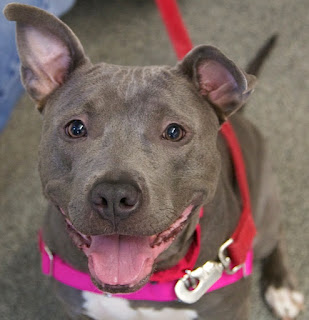 Cinderella is now living with three kids, one of which is autistic. She is doing wonderful work helping her live life to the fullest, which is really what this dog needed to do.

And while Cinderella didn't work out for us, she really got the best possible gig and is living a fantastic life. While we were angry, heartbroken and all of the things you would expect having to turn a dog into a shelter for doing nothing wrong, and having to explain the word "discrimination" to our three year old daughter, we understood. Our next dog would not be a pit because at the end of the day, the landlords make the rules and though we are adults, we have to abide by those rules.

Our search got much harder, but after several months of looking, we brought home Captain Love in December of last year from New England Brittany Rescue. 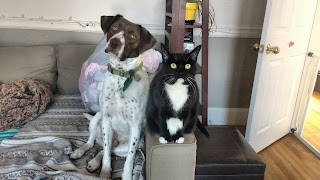 And herein lies the rub regarding BSL and why I think it's utter BS.

Any dog with a slightly blockier head can be considered a pit bull by people who know Jack about dogs.

Even if that dog is Captain Love.

Today, our landlords had a home inspector come in. Captain jumped at the door. Aislyn was trying to open the door, so my focus was on Ace, not the dog. When the inspector and landlords girlfriend came into the apartment, I didn't have full control of Cap. He jumped. I put a leash on him (after he slipped his collar!), got him working, and moved him to an open area of the apartment. I got his focus back in less than 30 seconds, which is more than I can say for my preschooler who was jumping all over the landlord's girlfriend and inspector.

They were here for 5 minutes. They left. I did apologize for his overexcitement, but she said it was fine. I don't like my dog jumping, but I handled it in an appropriate manner - as appropriate as one can when someone is coming into your house with a key.

Six hours later, I got texts from my landlord asking if Captain Love was a pit bull. This affects his insurance (which I'm aware of). The inspector told our landlord that the dog "looked like a pit bull and was terribly managed." Frankly, Aislyn was managed poorly, and the dog - after the initial jumping at the door, was totally fine and attentive. From her vantage point though? Yes, I could see that she would think as someone who doesn't know dogs might think that this is a literal shit show.

The last hour has been an anxiety provoking experience where I'm having flashbacks to taking a perfectly sound dog to a shelter, mixed with google searches of "where to find a cheap RV in a hurry?" because there is no way on earth that we are giving up this dog.

It's hard enough to be in the dog world and educate people about who is qualified to help with dog behavior. It's harder still when home inspectors are suddenly dog breed enthusiasts, and landlords can technically evict you for having any dog that "looks like a pit." 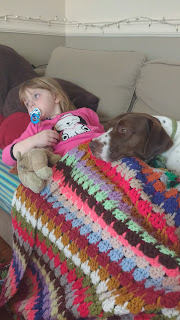 The slippery slope of people seeing what they want to see in dogs can affect people in a society where BSL is a real-life thing. Anyone, ANYONE who *thinks* a dog looks like something can say something that has real-life consequences to families who love their dogs. It's happening RIGHT NOW to Dan Tillery, a performer in Michigan who has had two veterinarians say his newly adopted dog is an American Bull Dog - but the cops think that he's a pit bull, and therefore, they can remove the dog or slap fines until the dog is out of the jurisdiction. 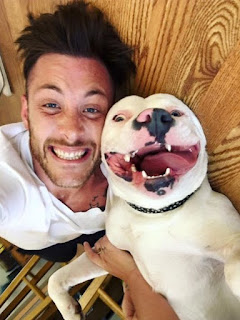 I stand with Dan and Diggy. #BSLisBS

It's been awkward since the first time our dog had to get relinquished by no fault of her own last July. Feelings were hurt and things were awkward going forward, which is not how I hoped to remember this place or the people we rent from. They are lovely people - truly. Yet one thing that hits an emotional chord can really affect relationships and it's going to be just plain weird, awkward and uncomfortable now. Particularly when my vocation is working with dogs and people all day long, and to not be trusted to follow the rules set by our landlords (because with that distrust, it seems like we are sneaking out to get a secret pit bull) is really, really, really insulting.

Even if Captain Love, or Diggy was part pit, it shouldn't matter. Even if either dog was full pit, it shouldn't matter. As stated before, personality should matter - we all have stories of getting bit by dogs that were XY or Z breed. (Mine is husky.  A friend's is Basset hound. Others still are pit bulls. My vet friends all have a demon retriever story in their arsenal.) But even if you take that part of the argument away and say we are not discussing what is, and what is not, a pit bull ----

---Today I had to have a conversation with someone who controls my living space about the block-headedness of my pointer/beagle mix and was nervous about it because I know how people see dogs who have skulls that are a 1/4" bigger than a goldendoodle's. Today I feared my husband and I would be packing up this week with our kid, dog, two cats and we'd figure it out later. That panic is now gone (landlord said "no, we're good.") but what happens the next time? Every time he walks by our front door, he's going to look in at the jumping "pit bull" and question it.

With Captain jumping at the inspector, our landlord is now positively reinforced for telling us that pit bulls can't be here because if that pit wasn't managed properly and bit the inspector, he'd get sued. That pit bull "would have bit" and therefore, he's likely thinking he's saved himself from getting sued.

(Suffice it to say, someone would absolutely be sued if any of our dogs bit an inspector or anyone on the premises: it would happen if it was Captain Love, Cinderella or Sadie-Jane. It would have been much more likely with fluffy Sadie with a stranger coming into our home and her doggie-dementia than the other two canine residents. Zeppelin would have slept through it.)

I wonder if the inspector would have said a word if my Golden retriever jumped up to say hi while I had my back turned to wrangle my 3-year-old? If she was afraid he was a pit bull, her guard would have been up and she'd be more likely to say something - which is really the case for anyone who has a 35-70 pound, short haired, stocky dog with a block head. And for that: