What do Cavalier King Charles Spaniels, English Setters, Bull Mastiffs and Greyhounds have in common?

They all came from mutts.

Well, to get technical: first some wolves tolerated people, then those social wolves were bred  (the mean ones were culled or likely eaten). From there, we bred these proto-dogs to do specific tasks, like "run really fast" and "sniff out the vermin". Then we had mutts who did jobs, who were then selected even more specifically to become the purebred dogs we have today.


The new (and admittedly, FUN!) thing to do is to take a blood sample, or cheek swab from your dog, and send it into a lab for DNA testing. This testing is theoretically going to tell you every breed that makes up your dog.

But that's not entirely accurate. (Actually, these tests aren't accurate at all according to a friend who works with genetic testing as part of her real-life job. That said, I expect these to be improved as time goes on and instead of being used for "breed testing," could be used for medical advances. How cool would that be?)

Purebred Dogs originated from The Mutt, Heinz 57, or any other term you can think of for an all American back yard pooch. Take the Boykin Spaniel. According to Wikipedia:

The breed of Boykin Spaniel descends from hunting dogs bred in the early 20th century as a gun dog in South Carolina, U.S.A. The dogs had to be small enough to ride in the small boats used by hunters in the swamps. L. Whitaker Boykin (1861–1932) experimented with crossbreeding different breeds, and the resulting dog is named after him. Legend has it that Boykin started his breeding program with a dog of unknown heritage named "Dumpy", found on the street by a friend of Boykin's. The Chesapeake Bay Retriever, Springer Spaniel, Cocker Spaniel, and the American Water Spaniel may have been used in the development of the breed. The area in which the breed developed, around Camden, South Carolina, was a resort area, and the breed was noticed by visitors and so spread around the United States.

When two purebred dogs are bred (or accidentally "bred" when the neighbor dog jumps the fence when Fluffly is in heat) it's commonplace now to look for the DNA test. My dad has a big, mostly white, long coated, double dew-clawed dog with a mild disposition and some unique coloring on her back. When you look at her, you can see the two breeds that went into producing her, which was confirmed by DNA Testing: Great Pyrenees and Australian Shepherd. Maybe it was an intentional breeding -or maybe since both breeds work on farms in tandem, the Aussie took the Pyrenees out for a night of dinner, dancing, and extra curricular activities. This makes sense, and we weren't surprised at all by the results.

But, when you have a dog in a shelter listed as a "Sheltie Mix", that looks like it MIGHT have some Sheltie in it, possibly, if you squint, and take it home thinking it's going to be a Sheltie in personality, demeanor, etc., you might be set up for some major disappointment when you send in the DNA test to find out it's grandparents were theoretically Yorkies and Dalmatians. (No offense to any Yorkie/Dalmatians out there. I love you, I really do!)


First: How does that even happen? Did the Yorkie use a stool to climb up to do the deed? 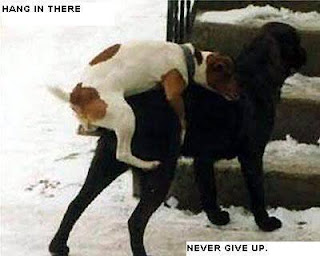 Second: What's wrong with Mutts? Why do we need to know exactly what kind of dog we have?
I think in part we have become dependent on our need to explain behavior, or appearance. "Oh, my Pit/Lab Mix is a bully, because he's got that Pit gene in him." "My little dog is yappy because of the Jack Russell in the system". "He's got blue eyes so he MUST be a Husky".


Dog genealogy is fun - and I think it should be used as a fun tool. You can have a bet based on "Guess The Breeds", which some of my friends have done with really fun results, and varying levels of sobriety.  I won $50.00 when I guessed my dad's dogs lineage.

However, the big takeaway is to keep in mind is Purebred dogs came from mutts, not the other way around. Most of the dogs out there are your average, run of the mill, Heinz 57. From those dogs, we picked traits we liked: Small and fluffy for apartments; long, short and loud for badger hunting; speed for rabbit hunting; medium, fast, and smart for herding; large, well insulated for swimming and retrieving; and short, squat, and funny - because we can.

It's important to note that not all dogs have purebred genes in them. Mutts are the original genes that we humans selected for and expressed in order to produce pure bred dogs. So to guess that the dog below is a Rottweiler/Shepherd mix might be a stretch, considering her ancestors produced the genes that went into producing different groups of dogs: some might be the Aussie Shepherd, the Rottweiler, and the Tibetan Terrier. She's black and tan, so the shelter put "Rottweiler" on her chart. She's got long fur so she must be a German Shepherd. Though, the black and tan coloration is a feature of tons of breeds, including the Black and Tan Coonhound (it's in the name!), Rotts, Min-Pins, and many herding dogs also happen to be black and tan. That gene came from somewhere. It came from a mutt, not a Rottweiler. We have our thinking backwards as to where genes come from.

In some cases, the DNA testing can give specific markers for diseases that might be useful for your veterinarian. Collies can have a tendency for Collie Eye Anomaly, and if it's a predominant gene in your dog, it might help your vet as the dog ages to know these things.

Personally, I think shelters would serve the public better by saying "Trucked in from Tennessee", which gives me as a trainer MUCH more information than "Lab Mix", when it's really a stretch. I've seen more Lab Mixes go to homes with people wanting a happy lab, only to have a dog that isn't a lab at all, in demeanor or look. Sometimes people just look at the label instead of getting the right dog for their family, and there-in lies the problem.

The other obvious problem to trying to make a dog fit a breed lies in home owners insurance. If you are sold a dog as a "Boxer / Lab Mix", and it's a Bully Breed (or, looks like a Bully Breed), certain home insurances won't insure you. Here is an article that discusses this problem.

If you have a Pit Bull Type dog in Lowell, your dog has to be muzzled. (For more on my personal stance on Bully Breeds, check my recent post on the matter). Of course, you can lie and say it's a "Lab Mix", but then what point is even doing the DNA testing if you're just going to lie about it anyway? It seems like the whole point is bragging rights, and when you can't even do that, the meaning is lost.


This came up for a client of mine who got dog that was advertised as a Boxer/Lab mix. This worked out great for the dog - she's sweet, and the "Lab" part got the family to look at this dog. However, anyone can look at this dog and say clearly that she's very likely a Staffordshire Terrier. She's a wonderful dog, and is a Frisbee Superstar - but when the insurance company comes knocking, she can say it's a lab....but no one will believe her, I'm sure. It's a good thing she doesn't live in Lowell.

My dog was sold to me as a Dalmatian/Spaniel cross. For those who know Sadie, it's pretty clear she's a Border Collie - perhaps purebred, perhaps just the dominant genealogy. And does it matter? Well, sort of. Purebred dogs have specific tendencies and needs - but all dogs need exercise, all dogs need outlets, and all dogs need companionship. She happened to like Frisbee, which I gladly would have played with a lab mix, a Dalmatian/Spaniel, a terrier mutt, or a Heinz 57. Sadie was statistically more likely to enjoy certain types of games, but sometimes, even purebred dogs can fool you.

So the long and short of this is dogs are DOGS. Purebred dogs and cross bred dogs (dogs of two purebred parents of different breeds) will statistically have traits akin to those of the parents of known origin, but a purebred dog is STILL a dog that needs certain things. Mutts are dogs, too, and I think we should stop trying to put a label on our Heinz 57's and really just enjoy having the companionship that only a dog can give.
Posted by Melissa McCue-McGrath, CPDT-KA at 11:36 AM

Email ThisBlogThis!Share to TwitterShare to FacebookShare to Pinterest
Labels: adoptions, discussion points, history of the dog