This is going to be a tough subject, but I just wanted to write down my experience and feelings (past and present) on "Doggy Drugs".

Had you asked me 10 years ago, or even 5 years ago, what I thought of drugs, "Puppy Prozac" and other such means of drugging a dog, I would have said something to this effect:

"Dogs give up a lot to live in a human environment, and we don't give them the outlets they require to survive in a home environment, especially in the city. We come home, walk the dog, and often that isn't enough. Your dog needs more training and exercise. Try agility to channel the energy in a positive way."

My feeling was summed up essentially as "Pugs, Not Drugs".


Thanks to Sadie, working with an amazing team of women at City Dog, and talking with people in the training & medical fields, my tune has changed drastically on the topic of drugs and dogs. The answer still may be agility, more training, lots of mental stimulation for many dogs - but when all of those options fail, when there are wacky blood work numbers, when there are honest phobias at play with a dog, then drugs can help. 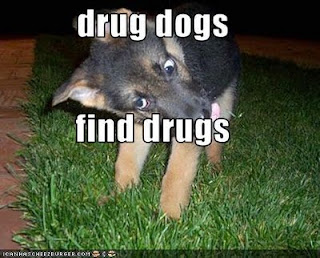 Before I go into more, I do have to say, as I do with everyone, that drugging your dog is a delicate topic for most people, and has to start with a conversation with your vet in tandem with your trainer/behavior consultant. Some people don't want drugs, period - even if the dog could be much happier and function much better through thunder storms, generalized anxiety, reactivity, and other problem behaviors that do not go away on their own. On the flip side of the coin, some people are way too quick to ask for drugs (which is why I think in part this has become such a hot button topic). There are dogs out there that never get beyond the back yard, never get walked, always bark at people passing by and are really frustrated by lack of experience, exercise and mental stimulation - and instead of exercise, the owners look to drugs to fix the problem - a quick fix. Dogs that have a sudden break down of behavior might need more exercise, or they might have a significant health issue - blindness, arthritis, a sore tooth, sore knees, hearing loss, thyroid problems - it's absolutely imperative that the VERY first step you take when your dog is exhibiting a wayward behavior to see your vet. If the first step from your trainer or behavior consultant does not include a full work up by the veterinarian, get a new trainer.

All of that being said, here's what happened with Sadie, in the hopes it might help someone in a similar boat.

Sadie was a very happy dog when we moved to Boston in 2004. She did better in the country, but manged just fine in the city. We were competing in K9 Frisbee until 2007. As part of that, she was getting several hours of exercise a night, working at local parks under the cover of darkness since at the time, it was illegal to run off leash in baseball parks. She went to work with me every day, and life was great for Sadie.

Around 3 or 4 years old, I noticed she would violently shake at the sound of construction, thunder and fireworks. Garbage trucks would set her off - and nothing could distract her. She had one of these panic attacks while I was working at the animal hospital - so one of the vets checked her out at the moment of shaking. Her heart rate was through the roof. She was having a very real reaction to the construction down the street.

On my second date with my now fiancee in 2007, I got a phone call from my roommate stating I had to go get Sadie. She was hiding in a closet, buried herself under some dirty laundry, and he was unable to coax her out. The neighbors were setting off fireworks in the street, and Sadie was absolutely terrified. There is nothing sadder to a dog owner than seeing your dog shaking, panting, hiding from something and you can't do anything to let her know it's ok. It was made worse by her turning her nose up at a marinated steak (especially since I'm a vegetarian - she doesn't get them very often).

Within the last 2 years, Sadie's phobia's have got worse, as they tend to do - the doorbell, trucks pulling up, and finally, separation anxiety. Every time we'd leave, she'd panic. She lost her playful "Sadie" demeanor, and became an anxious ball of fear, and fluff. She's almost 9 now. She doesn't play for 3 hours a night anymore, mostly because her physical needs have changed. As an older dog, she gets tired more quickly, has some arthritis, and had a heart murmur that needed to be monitored. To work around it, we play ball at the end of our street a few times a day, she gets a 45 minute walk in the morning, several other short walks, and several opportunities to get aerobic exercise a day. We also use puzzle toys to keep her mentally stimulated, and have changed her food to make sure she doesn't have too much junk, too much protein, and too much... period.

Our landlords told us they would bark at the kids in the street after we'd leave for the day.  So we started putting them upstairs with a gate up so they'd have free reign but no access to the precieved stimulus. Sadie's barking would lead to Zeppelin's barking, and we had some very unhappy neighbors - none of which would tell us they were barking when we left the house after we made them move upstairs. It's hard to fix a behavior you have no idea is happening. One day, we got a call from our landlords saying that the dogs were going nuts, and that we had to fix it, soon. I asked how long they had been barking, thinking it had just been for the hour I was gone. He said it had been going on for months. MONTHS? We had no clue it was that bad, and they never told us the behavior was still happening, even after imploring that they keep us in the loop so we can get the behavior under control. I sat outside one day, and could just hear utter panic in Sadie's barks. I felt horrible.


I missed my old dog. She was in there somewhere - but we really were at a loss. We had talked about drugs as a last resort, but we still wanted to try some other things first. To be perfectly frank, I had even brought up the dreaded conversation "what happens when she bites Zeppy - or attacks a cat? We'd have no recourse but to put her down". I had been thinking it for awhile, and could only bring it up after having a few glasses of wine one night because otherwise, it was just something I couldn't say out loud sober. I'm being totally and completely honest. I brought up the discussion of putting my beloved friend to sleep because I've been in the industry long enough to know that putting a dog up for adoption who is 9 years old, and has a bite history is not a good outcome. Allowing her to live with such stress and anxiety - and putting the other three animals at risk - was not fair, to her or the other animals in our home. Things were getting pretty bad.

We knew we had to do something, but every technique we tried left us where we started.  We tried the thunder shirt for storms, which didn't really help her.  We tried the ace bandage wrap technique and she just looked silly.  We tried counter conditioning the doorbell, which left her anxious and waiting for the doorbell to ring. We tried much more exercise, which didn't help, because the root of her problem was anxiety, not lack of exercise. The only thing that got better was walking the dogs, but that meant crossing a busy street, lots of attention training, and Zeppy was picking up on Sadie's anxiety. She would not bark at the passing dog - but Zeppy, sensing her anxiety, would.

The final straw was when she lunged at Zeppy out of the blue, and later that same day jumped a gate I had put upstairs to confine them so I could go to work. The gate was at the top of the stairs, so when she jumped the gate, she fell down the stairs. My landlord called saying there was a loud noise, and lots of barking. I got home to see Sadie shaking and whining at the bottom of the stairwell. I immediately called my friend (who happens to be Sadie's Vet).


The drug name isn't important - but we tried a couple different ones to find what would help her the best. The first one just made her really sleepy, and didn't touch the anxiety...though I must say, Stoned Sadie was entertaining. We tried a second drug, a more permanent solution, and I have to say - it's awesome having my friend back.

In the last month (she's been on this drug for about 30 days now), she still gets nervous around Thunderstorms, but snaps out of it in a matter of minutes instead of hours. The doorbell rings, and she goes to her bed, instead of barking and shaking at the door. She still barks, but is able to settle with much more ease. She's even tried to play with our other dog - something she hasn't done since we got him 3 years ago. A couple times a week, she jumps up on the bed, play bows, and tries to get us to play with her. She settles down nicely, the cats come out to hang out more often (I didn't even think that they were affected, until after the drugs kicked in).


Perhaps the most brilliant part, we can pass by dogs on the street without utter panic. We still work a lot of attention behaviors, and don't let her say hi to the passing dog (space is still important for her), but to pass a dog at 5' is huge. Because she is absolutely calm about passing other dogs, Zeppy lets them pass without incident. Her behavior, and mine because I'm not so anxious, absolutely effects the other dog on our walk. All three of us can walk, slack leash, by a dog on the street.  She's 9, and I don't think I've been able to do that with her in at least 5 years. There is a ton of training that I can finally do with her to help her with problem behaviors that I had hit a wall with because the anxiety was so bad.


Now, had I just given her the drugs, and not worked on any counter conditioning, or kept up her exercise regimen, they wouldn't have worked. Yes, she may have been less anxious, but the behaviors we disliked were still ingrained. She wouldn't know what to do when the doorbell rang, so she likely would still run, charge and bark at the door. She still does, but we can turn it off and send her to her bed - an alternate behavior, something we haven't been able to effectively train for years.


Sadie is back. She's back to being Sadie - still kind of a bitch from time to time, but a playful, engaging animal that is smarter than a 5th grader.